Is Decaf Coffee Bad for You?

And Everything Else You Ever Wanted to Know About Decaf Coffee 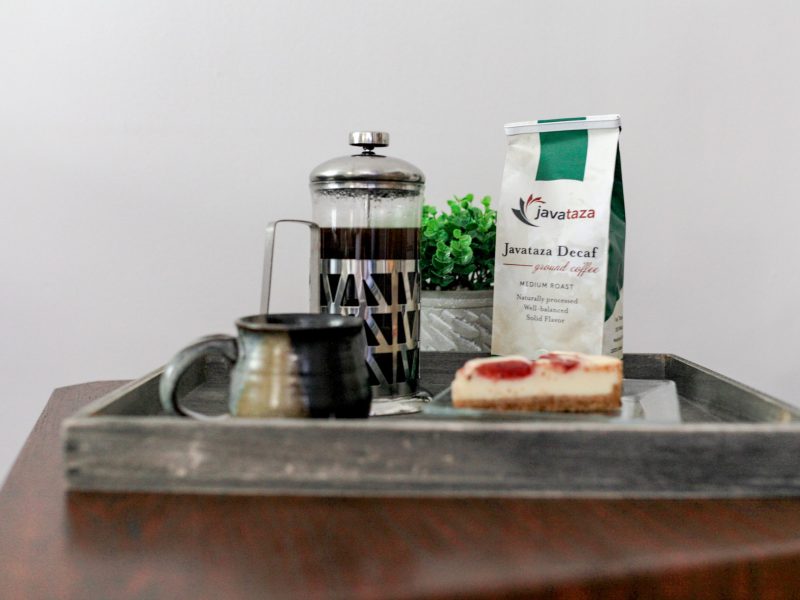 Most of us enjoy a good caffeine buzz, at the right time of the day. But that buzz quickly becomes a bane, when you’re tossing and turning in bed at 1 am in the morning, knowing that you have to be awake in a few hours for an early morning business breakfast. Or maybe you’re one of those people who has a stomach that cries an acidic rebellion when caffeinated coffee crashes in on it. Whatever the case may be, there are definitely situations where a good decaf coffee is a valuable resource to have available. Because, well, coffee is more than just a caffeine jolt, it is a comforting liquid that should be able to be sipped on at all hours of the day.

So, let’s talk about decaf coffee.

What is Decaf Coffee?

Quite simply, decaf coffee is coffee that has had most of the natural caffeine removed from green coffee beans before they are roasted. The decaffeination process happens after the normal sorting, washing, and drying processes of coffee are finished. Like all coffee, the quality of decaf coffee is determined by many factors, including location, environmental factors, method of processing, quality control in picking and processing, and quality/style of roasting. Generally speaking, decaf coffees have a milder, less bold flavor, than regular coffees.

Does Decaf Coffee Have Any Caffeine?

How Is Caffeine Removed from Decaf Coffee?

There are three primary methods used for the decaffeination process. All three methods either water soak or steam the green coffee beans to make them swell and get their “pores” to open up. This opening up allows the caffeine then to be removed using one of these methods:

This is one of the most widely used methods of decaffeinating coffee. Over the years a few different types of solvents have been used for this process. Unfortunately, quite a few of these solvents were toxic with negative health results. Because of this they are no longer in use. The two common solvents used today are methylene chloride and ethyl acetate. The FDA has approved both of these solvents for use, but many people still maintain a legitimate concern of negative effects from these solvents.

Here at Javataza we have stayed away from decaf beans that used the solvent-based method in an effort to be quality, environmentally, and health conscious.

This is the most recent method of decaffeination. It utilizes CO2 in place of chemical solvents and is a bit more targeted in what it releases from the caffeine. In this method, the green coffee beans are placed into a sealed stainless-steel extraction vessel that is injected with liquid CO2 at a high pressure. This pressure extracts the caffeine and the C02 along with the caffeine is transferred to another container.

This process holds promise and is not as invasive as the solvent process, but it is expensive and takes significant setup. Because of this, it is generally used only for large scale, commercial grade coffee setups, making so that most coffees that use this method are lower quality coffees that are not grown with sustainable practices.

This is a chemical-free decaffeination process that was developed in Switzerland in the 1930s. It became a more commercially used process then in the 1980s and the Swiss Water Company in Canada remains the flagship of this method today.

The swiss water process is a fascinating process that uses hot water to extract the caffeine and the flavor from an original coffee bean batch. This batch of flavorless beans is discarded while the water then is run through an activated charcoal filter that is designed to only capture the caffeine particles and allows all the oils and flavor components of the coffee to pass through. This water then is used to flow back into a new batch of green coffee beans. However, since the water is already flavored, the flavors in the fresh batch of beans is unable to dissolve, leaving only the caffeine to be removed. This is an environmentally-friendly and healthy way to remove caffeine and still maintain a good quality coffee product.

Here is a short video showing more about the Swiss Water Process.

Needless to say, THIS is the method that our decaf coffee come from and we are proud to sell certified Swiss Water® processed decaf coffee.

Is Decaf Coffee Bad for You?

The simple answer is probably not. However, much depends on the process that is used for decaffeination. The solvent-based method has a higher probability of negative or harmful substances making their way into your cup of coffee than the swiss-water method or the CO2 method.

Every person is unique and different bodies respond differently to acid levels, caffeine, etc… Many people that struggle with stomach problems and pain from the acid in coffee, find that drinking decaf coffee helps with this problem. Generally speaking, decaf coffees are not harmful to individuals, and many of the touted health benefits of coffee still apply to decaf coffee also.

What is the Best Decaf Coffee?

Well now, we hate to toot our own horn. But, since you asked…🤣

Actually, here at Javataza, we are quite proud of our decaf coffee. But we’ll let one of our customers rave about it rather than us. Here’s a review that J. Natiello left about our decaf:

“We found this coffee at the Amish Market in Eaton, Maryland while on vacation. We are in love with the decaf. Rich bodied and delicious. We also enjoy the Italian Roast and Guatemalan. We live in Florida and have ordered from this company. Very quick ship. Highly recommend this company.”

We are confident in our decaf coffee both because we know it is processed in a high-quality way with the swiss water process and because of our meticulous method of roasting it that ensures a delicious cup of Java for you.

Sources that were used in this article and other resources on decaf coffee: